This week the College World Series (CWS) is being played in town. Since 1950, the CWS has been held in Omaha and through the 2010 series, the CWS was played at Rosenblatt Stadium in South Omaha. I have many great memories of going to games in that stadium. In 2011, the CWS moved to the brand new TD Ameritrade Park in downtown Omaha.

On Wednesday, I was heading back to campus from a change of command ceremony for the 55th Wing at Offutt Air Force Base and stopped for a few minutes at the original site of CWS in Omaha, which has been preserved as a small infield, signage, plaques, etc. It’s a shrine to 60 years of CWS in Omaha!

It was a beautiful morning and I walked into the area and relaxed in one of the Rosenblatt seats that are installed around the small infield. A few minutes later, in walked Gӓbe.

Gӓbe, obviously a LSU fan, and I started talking and I asked her to have a seat and join me. She asked what this was for and I said I had a blog…then I revealed the $50 part of the deal and she accepted being week 44. 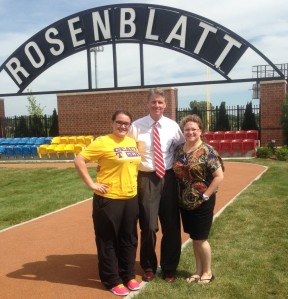 Gӓbe was there with her mother, Elodie. Gӓbe is a big LSU baseball fan. She said she missed only two of their home games this year, in spite of being in a cast and on crutches for part of the season. This was her third time in Omaha for the CWS and she said she misses the old ballpark (Rosenblatt).

Gӓbe is a senior at LSU majoring in Sports Administration and Marketing. She works in the LSU Athletics Department. She loves sports, and in particular, baseball. She is hoping to go to graduate school. She is from Baton Rouge and loves being from Louisiana…loves the food, the fishing and Mardi Gras. “People sometimes make fun of us from Louisiana, but they fall in love with everything about us when they get to Louisiana”, she said.

People also fall in love with Omaha when they come to town for the CWS. The CWS is really just an extension of Omaha to the rest of the collegiate baseball community and will be for at least another 22 years. The event brings the best fans to town. I had the pleasure to meet two of them this week!