Justine caught my attention…and the attention of most every car passing her on the street.

She was standing, rather dancing, on the sidewalk holding a sign for Firehouse Subs. She was smiling, waving, singing, dancing and jumping up and down. I pulled over and watched for about 5 minutes and cars were honking and people driving by were smiling. Some were pulling in to the business.

She was making people laugh and smile.

So, I approached her and introduced myself, Giving50x52, and asked her to be week 51. She got excited and said yes. 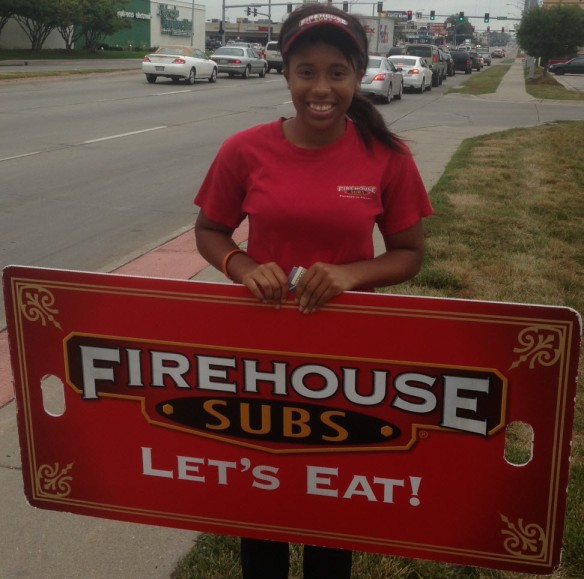 A little about this impressive young woman…Justine is from Birmingham, Alabama but has lived in Omaha for 12 years. Her dad used to be a minister but now is a regional manager for Direct TV. Her mom is a caregiver and also homeschools Justine and her 5 siblings. Of the six kids in her family, Justine is third oldest and they are all girls except for the youngest.

Justine is in her last year of high school and is starting to look at colleges. She said she wants to stay close to Omaha and is considering Creighton and UNO. (I told her we really want her to come to UNO!).

Justine has worked at Firehouse Subs since November 2012 and two of her sisters also work there. She said she loves to sing and to play tennis.

But back to Justine’s sidewalk antics…she approached her task of waving the sign at motorists with such tremendous passion, enthusiasm and fun. She was not wearing headphones and listening to music…she was creating it by singing and dancing and swinging around.

Justine provided a great reminder to us all that you might not be doing a task you necessarily love or want to do the rest of your life, but you can still give it your all. Do it with gusto.

Just when I think I’ve met about the most impressive person on my Giving50x52 journey, along comes Justine and then I’m not so sure. Justine was very personable, bright and fun. I really hope to see her at UNO in the fall of 2014!